We were called by the daughter of a man who had been in a terrible motorcycle accident.  He actually had her on the back as a passenger and was driving down the road in a commercial district when a car came flying out of a parking lot and turned directly into our client's bike causing him and his daughter to fly off the cycle and onto the pavement. The father slid about ten feet after slamming his head and shoulder onto the hard asphalt.  He suffered a serious closed head injury despite wearing a helmet.  He also slammed his right shoulder onto the ground causing a massive tear in his rotator cuff.  He had terrible back pain and was on huge doses of medications just so he could tolerate physical work as a contractor.  He was never able to resume full capabilities and was self employed so his business deteriorated as he had to refer heavy jobs to other contractors.  We succeeded in obtaining the full policy limits of $100,000 on the at-fault driver's policy plus the full policy limits of $50,000 on the underinsured motorist coverage which he had on his own policy.  Our client's daughter suffered a minor hip injury which resolved, thankfully.  We obtained a generous settlement for her as well. 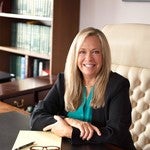