Photograph the Scene of Your Car Crash

Car accidents can be scary and painful too if you are injured.  If you can, however, take lots of pictures of the accident scene so you will have an accurate portrayal of exactly what happened in the months to come.  If you are too injured to do so, enlist the help of another passenger or witness to take photos for you. 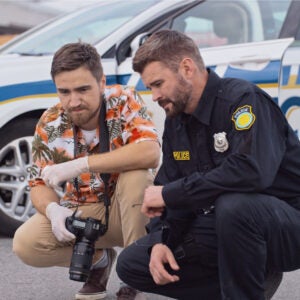 Your goal is three-fold:

Be sure to take pictures that show the overall scene.  Then zero in on the details.  For instance, a distant shot can show how the cars collided and where the collision occurred – at a stop sign or intersection perhaps.  Be sure to photograph surrounding details like cross walks, traffic or stop lights, and construction areas.  Remember to capture weather conditions like wet or snowy roadways. 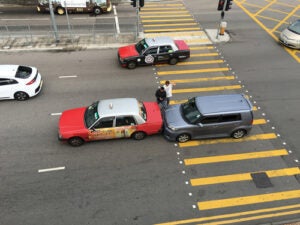 The scene itself has stories to tell, so be sure to photograph telltale evidence like skid marks or a non-working traffic light.  Try to have your pictures show scale by putting an object in the frame of your shot – for instance, place your shoe next to a skid mark – so that the skid mark's size can later be calculated.

Your attorney will likely hire a professional accident reconstructionist who can calculate the speed of the cars involved by analyzing data from the scene.  Since evidence can degrade over time or due to weather, your contemporaneous pictures may be a gold mine of evidence if you decide to pursue a claim.

Property damage is damage to any inanimate object – meaning damage to things rather than people.  This too has a story to tell.

Photograph all property damage, including damage to cars, trucks, motorcycles, or bicycles involved in the accident.  Pretend you are creating a jigsaw puzzle with your pictures.  Take pictures of each vehicle involved in the accident by taking several pictures of the whole car from different angles.  Then take close ups of each section of the car to show various areas of damage or lack of damage.

The inside of a vehicle is also a rich vein of evidence you need to preserve.  It can show how occupants were injured in the crash.  Photograph air bags that deployed, damaged car seats or seat belts, broken windows or windshields, and the like.

Take pictures of each vehicle's license plate.  Also photograph other parties' drivers' licenses and proof of insurance for future reference.

Personal Injury or Harm to Persons

If you have been hurt in the accident, get pictures of all your injuries.  Close up pictures will be valuable evidence of just how badly you were hurt.  Photograph injuries that others in your vehicle may have sustained.  And do not forget to get pictures of others involved in the crash who may have been injured as well.  One top personal injury attorney had folks claim they were unconscious at the scene when a random photo showed them standing on the berm of the road smoking a cigarette!

It is also a good idea to get names and contact information from any witnesses at the scene.  Do not assume that the police will do this as they may arrive at the scene after the witnesses have left.  Witnesses offer valuable contemporaneous testimony as to what happened at the scene.  Make sure you know how to reach them after the fact.

If a picture tells a thousand words, then accident scene photographs can tell the tale of the accident when memories fade.  Taking lots of pictures from both afar and up close will secure the evidence you need to pursue any personal injury claims you have.

So, get out that camera phone, and point and shoot until you have captured the complete scene of your vehicle collision.  You and your lawyer will be glad you did when preparing your case later on down the road!